Add to the Archive!

Alumni list of actors who played Northrup through the years:

“My favorite [Laboratory] memory was the day that my best friend decided to audition for some theme park in Virginia,” recalls John Grant. “I tagged along to see what it was like. We stopped by the theater department office and ran into Emile [Trimble]. She was her bubbly charming self and urged me to audition as well. She had me read for [strolling character] Sir Percival and I thought that was it, but my friend saw a note to me on the theater department message board a few months later. I had since changed colleges, so I was never going to see it. My friend mailed it to me and as soon as I read it, I picked up the phone and called Emile. As it so happens that day was the last day she was going to wait for me to respond. Busch Gardens was a pivotal time in my life and I wouldn’t trade those memories for anything.”

“I grew up in Williamsburg and had worked at Threadneedle Faire a few summers during high school,” Ryan Kershner remembers. “I was midway through my freshman year at Massachusetts Institute of Technology when I heard about auditions.”  After Ryan landed the role of Northrup, he noticed a parallel between his summer job and his college path. “It was funny because I had just selected my major at MIT as Materials Science, and here I was with a gig turning iron into gold. Emile [Trimble] didn’t seem to get the joke and just smiled politely.”

“In 1989, I was a junior in college and was hired by director Emile Trimble for what would be my first of three summers working at Busch Gardens: The Olde Country,” David Coronado explains. While he worked his first season as a strolling performer, “Over that summer I saw The Enchanted Lab show quite a few times. I was VERY impressed with it. The level of technology was astounding and the musicality was really infectious. With so many of us performing outside and trying to round up an audience in the humidity of a Virginia summer, the Lab was a performer’s dream job. A built-in audience lining up, singing, dancing AND air-conditioning?!? It was the jewel in the crown for park performers.”

After a year as a “stroller,” David Coronado got the call to return as Northrup the following season.  “I was sent the script,

cassette tape, VHS tape, and sheet music via US Mail,” David explains. “The pre-rehearsal process was unusual since it was completely on my own. I learned the show alone and had to imagine myself onstage doing the blocking. I was fortunate in that my college roommate and fellow acting major, Mike Dailey, had played Northrup two years prior. So I could ask him any questions I had.”

“Our rehearsal process onstage was challenging,” continues David Coronado. “The Lab was already up and running as a working show … our rehearsals were either after the Lab’s last performance or before the first performance. Both early AND late days. It was intimidating finally being on the stage I’d been visualizing all these months.”

“The level beneath the stage was where our dressing room was and where the computers that ran the show were kept,” Tom Witherspoon explains. “Because of the IMMENSE computing power being used (an entire rack of 386 machines!), the temperature of that level could never exceed 65 degrees farenheight. That sounds great, but when you exit your show and retreat to below so your partner could perform, that temperature difference was not good for you. I kept a jacket down there so I wouldn’t get too cold! Remember that summer weather in Williamsburg averages around 90 degrees and 70 to 90 percent humidity.”

“The green room in the basement was freezing,” Jamey Schrick concurs, “and reeked rather pleasantly of the chemicals used in fog machines. To this day that smell takes me back. It was very lonely down there, since the only time we saw anyone was if we left the theater or during the crossover with another Northrup coming onto or leaving his shift. I read a ton of books that summer.”

“I performed a total of 2,212 performances,” says Scott Wichmann, “I kept a running tally on the dry erase board downstairs.”

How did Scott and fellow Northrups keep the show fresh, day after day?

“There were certain ad-libs I would resort to,” Scott explains.  “Whenever one of the show’s ‘audience volunteers’ turned out to be named Brandy, I would respond with ‘Ah, Brandy!! You’re a fine girl! What a good … wife you would be.’ And the parents would crack up laughing, remembering that 1970s song by ‘Looking Glass.’ ”

“Most of us Northrups would also find ways to incorporate whatever song or trend was fashionable at the time. But it was always very, very important that Northrup never ever lost his earnestness or descended into cynical commentary or a too-cool-for-school attitude. The audience had to believe he was genuine, if a little playful and a bit carefree, but always wanting to do his best and never snarky or ‘over’ it.”

“Typical schedule meant five or six performances a day, with 30-45 mins in between,” John Grant explains. “Those breaks were generally spent in the lab’s basement, where only Northrups and management were allowed. Occasionally, if you changed fast enough, you could go spend 15-20 mins at the stroller’s [strolling performer’s] break room around the corner and hang out with other theater performers like Sir Percival. the Ratcatcher, the French Singers, the Tourists, and the court musician (if there was one). During the slow months breaks were pretty lonely as you were the only Northrup performing that day. That’s when escapes to the stroller break room were critical.”

“I never really got the hang of the sleight-of-hand stuff I had to do in the preshow,” Tom Witherspoon admits, “so I just turned the whole thing into ‘The Worst Show by an Apprentice Magician Ever!’ and people ate it up. I consider [the Laboratory] to be my master class in improvisation!”

Tom recalls that “my best audience was also the smallest: 5 people! It was the last show of the night before the park closed, and I had the option of bailing on it but I decided to go ahead. They were very appreciative and when the word got back to the stage manager I got some sort of ‘Employee of the Week’ award.”

“One couple came up to me after a show and asked what part of England I was from,” Jamey Schrick said. “I answered honestly … ‘Iowa.’ I guess my fake accent was pretty good!”

“I may have been the only Northrup to miss 3 weeks of my show due to a hang gliding accident at Kitty Hawk,” recalls Bob Goliath Taich, “and the first to change Busch Gardens’ what you can’t do on your day off policy. With a wave of your hand your broom would move along the stage as a carpet would lift at its edge for you to sweep up. Wave your hands again to turn the pages of a giant spell book. Did I mention I got to turn iron into gold, with a cutting edge fiber optics? And unlike Kitty Hawk I actually got to fly.” 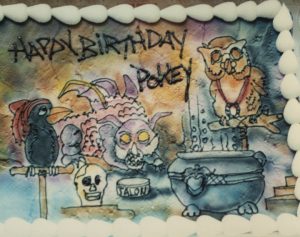 Tony Pinizzotto received this special cake for his 21st birthday, which he celebrated while playing Northrup.  “My nickname with my roommates and friends [at Busch Gardens] was ‘Pokey.’ ”

“I remember being absolutely exhausted after we all opened in the spring,” Tony continues, “but as the season went on, we seemed to get conditioned to the run. I lost a ton of weight (because all the running around on stage). This wasn’t a huge surprise because a few of the Northrups from prior seasons warned me it would happen.”

“We had a log in the theater that we would write down and record the good, the bad and the ugly of the day’s events,” Tony Pinizzotto recalls. “From anything to a crazy guest interaction to a technical issue that may have affected the show.”

“I once got to perform a show for Gladys Knight,” Tony says.  “She came up to the stage when most everyone had left, and had a huge hat, sunglasses, and scarf on (incognito?) and said ‘I just want to tell you personally that you were wonderful. I really enjoyed the show. Your voice is beautiful. Okay, well, I gotta run. Buh-bye.’ I was dumbstruck trying to process what had happened. I still get goosebumps thinking about it.”

“We would have ‘Classical Music Sundays’ where we’d ask only to play classical music on the boom box in the dressing room,” Tony remembers. “We also tried to have a copy of the Arts & Entertainment section of the New York Times so we could see all the cool Broadway stuff going on. The Northrups stay, for the most part, a very close knit group.”

“I remember it so fondly,” says Jamey Schrick. “Every time I turned the suit of armor into gold I felt goosebumps, and got a little lump in my throat. Every time. That show was so wonderful.”